It’s been said that no man is an island. Innovations in art, business and sport have often been the result of teamwork, with one forward thinker breaking down a barrier, only for others to carry the idea further. Science, of course, is no exception. In fact, the whole concept of science is famously built upon a principle of peer review; independent verification, or critique, of findings. When big business gets involved, however, the process of co-operation can become more difficult to navigate. Furthermore, logistical facilitation of such efforts has traditionally proven problematic. Currently a myriad of factors, including shifting scientific expectations and evolving technology, are allowing for an increased level of collaboration, particularly in the life sciences.

Collaboration in the New Life Sciences

Recently a group of scientific authors combined to write a book entitled ‘Collaboration in the New Life Sciences’. The book’s abstract speaks to the trend.

“In recent years the organisation and practice of collaboration in the life sciences has undergone radical transformations, owing to the advent of big science enterprises, newly developed data gathering and storage technologies, increasing levels of interdisciplinarity, and changing societal expectations for science.”1

According to chemistryworld.com, an aging population has led to an increased demand in personalized medicine, a highly specific approach that addresses an individual’s unique molecular and genetic profile. It’s a methodology that is not particularly conducive to the highly siloed big batch practices that have been prevalent in the past.

“The inherent inefficiency of drug manufacturing is one factor to investigate because batch processes are not conducive to producing small quantities of tailored, patient-centric formulations,” writes Dave Tudor, managing director of the Medicines Manufacturing Innovation Centre, a UK-based entity designed to foster collaboration between pharmaceutical companies, research scientists and manufacturing partners. “They are also inflexible to fluctuations in demand.”2

According to Tudor, two thirds of newly approved drugs are the result of the discoveries of academia or small biotech companies. Big pharma, eager to access this innovation, has dedicated great resources to bioscience clusters or open-innovation approaches with these contributors. Tudor argues that the collaborative efforts must be taken a step further,

“The full potential of collaboration can only be unlocked when big pharma begins to work hand in hand not only with academia and SMEs, but also with each other.”2

Producing next generation sequencing technologies involves analysis, interpretation and visualization of data. According to scientific publishers BMC these skills are rarely covered in a single laboratory.

“More often the samples are isolated and purified in a first laboratory, sequencing is performed by a private company or a specialized lab, while the produced data are analyzed by a third group of researchers. In this scenario, the support, the communication, and the information sharing among researchers represent the key points to build a common knowledge and to meet the project objectives.”3

As good intentions alone will not facilitate scientific breakthroughs, proper infrastructure is required, and this involves efforts in the field of Computer Supported Collaborative Work (CSCW). To this end, BMC have developed the ElGalaxy system, which endeavors to allow for the easy sharing of data and debate.

“Specifically, we integrated collaborative functionalities within an application usually adopted by Life Science researchers,” write the collaborators. “ElGalaxy, therefore, is the result of the integration of Galaxy, i.e., a Workflow Management System, with Elgg, i.e., a Social Network Engine.”3

DNA of a Partnership: Life Sciences Collaboration in Action

One example of a fruitful collaboration in action involved a four company initiative to create a state of the art DNA assembly platform. The results, showcased publicly in May of 2019, is a system that purports to increase throughput and manufacturing speed while reducing production costs for other researchers who wish to utilize it.

As society and nature continue to evolve, science will be faced with ever changing challenges. The result will be a steady push for innovation and new solutions. The synchronization of interests between various entities and organizations, combined with the collaboration of top scientific minds, may well be humanity’s best chance to meet the obstacles that will face us as this century unfolds. 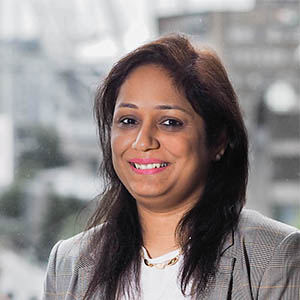 Tulika is a sales and management recruiter at Goldbeck, specializing in mid to senior level positions. A recruiter from the beginning of her career, she attributes her success to a passion for people and helping them achieve their own goals.